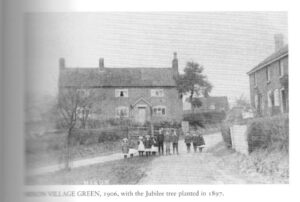 High Cross was originally listed for the first time in the 1791 enclosure award, allotted to Earl Ferrers as house buildings, orchard and croft in the parish of Stowe. As yet, there is no real date of construction officially available, as the original deeds have been lost in the midst of time. However documents relating to Chartley estate dwellings gives clues as to the date of construction, which would most likely be the late 17th century or early 18th century.

High Cross again appears in documents relating to Chartley Estate sale as lot no.94 and was let to a Mr. J.T Jackson for £19 per annum in 1905. At this time it was listed as ‘valuable accommodation, conveniently situated in the village of Hixon. It comprised a brick and tiled dwelling house containing parlour, house place, kitchen, dairy, cellar and 3 bedrooms. The brick outbuildings contained 2 cow sheds each fitted with a loft over, a mixing house, fodder house and 2 piggeries with fowl house over’.

Today the house still retains its cellar, well and many original features inside. There were 3 bedrooms upstairs until the 1960s or 70s and the bathroom and only toilet were downstairs where the small study room is by the stairs.

The bread oven is a domed chamber in the kitchen with a hinged cast iron decorative door.  The oven would have been heated by filling the chamber with burning faggots of wood which would then have been scraped out before putting the dough in inside to cook. There is evidence of a chimney flue for smoke on the outside of the house. 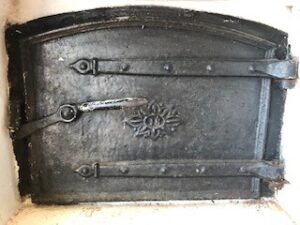 Other features which testify to the age of High Cross include an original well in the back porch, original beams in the kitchen and living room (some of them) and a tiled fireplace in the dining room. 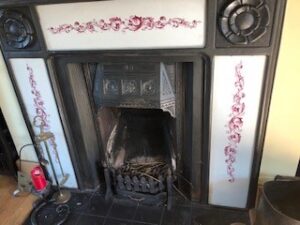 The fireplace resembles a Georgian era fireplace (circa 1714 onwards); it is typically ornate with a floral design on single vertical tiles. Fireplaces from this period were that of grand proportions and typically designed to be a complete focal point of the room. There is also a fire hearth in one of the bedrooms upstairs but two others have been removed during earlier works. 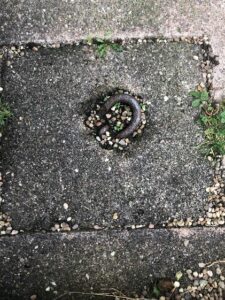 The beams in the kitchen are all original and the fireplace would have been a large hearth used for cooking. Attached to one of the central beams in the kitchen is a large wrought iron hook, which can still hold considerable weight ( in fact occupants in the 60s tied a swing to this for their son to play on). This will have been originally used for hanging a large cooking pot or drying meat.

In the kitchen the sink used to be where the small window is now in the corner with the arga/hearth along the same wall. There was a storage for coal in the outhouse, although it is not known when this was added. The coal storage was removed in 2001. 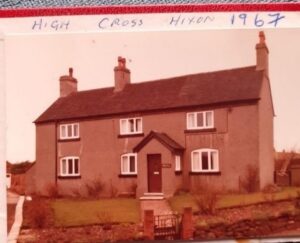 This is another picture of High Cross taken in 1967 when Dorothy (known as Dolly) and Harold Robson lived in the house. At that time it used to have 2 staircases – one from the cellar that led to a corridor and then to another door to the dining frame (the outline of this door can still be seen in the lounge). Part of the original stairs from the cellar is still there today although they don’t lead anywhere. There were in fact 2 doors into the dining room.  In common with many houses of this period, it is likely that the cellar was used for storage to preserve the life of food. The cellar is quite large and even has a small window out onto the front of the house.

This website uses cookies to improve your experience while you navigate through the website. Out of these cookies, the cookies that are categorized as necessary are stored on your browser as they are essential for the working of basic functionalities of the website. We also use third-party cookies that help us analyze and understand how you use this website. These cookies will be stored in your browser only with your consent. You also have the option to opt-out of these cookies. But opting out of some of these cookies may have an effect on your browsing experience.
Necessary Always Enabled
Necessary cookies are absolutely essential for the website to function properly. This category only includes cookies that ensures basic functionalities and security features of the website. These cookies do not store any personal information.
Non-necessary
Any cookies that may not be particularly necessary for the website to function and is used specifically to collect user personal data via analytics, ads, other embedded contents are termed as non-necessary cookies. It is mandatory to procure user consent prior to running these cookies on your website.
SAVE & ACCEPT